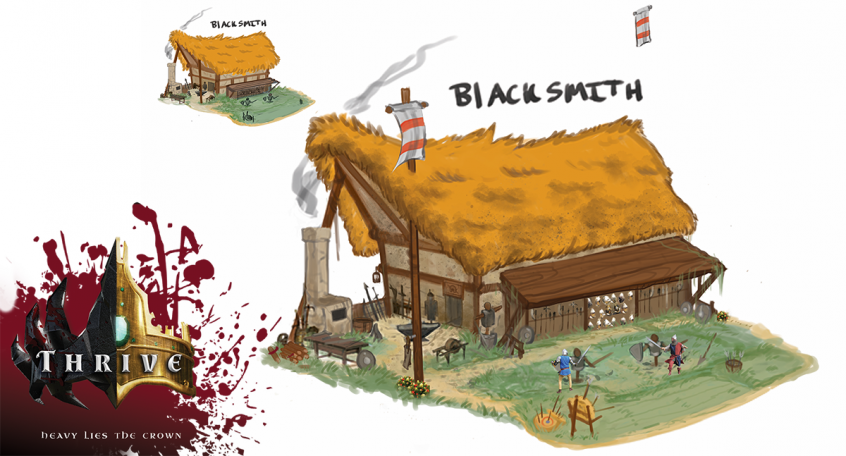 Welcome to the second entry of our Dev Diary. We’re honoured that you came back to hear how Thrive: Heavy Lies the Crown is coming along. So, let’s get to the updates:

Here’s an update on this week’s workload:

I’m going back to some of the earlier concepts of our in-game buildings, exploring narrative and polishing some details. The little things matter like adding dirt and footprints to a trail. However, it can be tricky to not get caught up in the details and lose track of time!

Designing the player interface was an interesting challenge because of how iterative the process will be. So much will depend on the response from players but will also depend heavily on gameplay. The gameplay and UI need to change if the player doesn’t see value in them. No matter how gorgeous the UI is. This is also compounded by innovations and eventual limitations by the development team to determine what is possible in the time allotted.

Unlike web and mobile application design, the scope of the UI is larger and more intricate and integrated. There are vaguely similar games and therefore vaguely similar UI elements that we can use as inspiration but because a lot of our game elements are our own so must the UI. This creates an opportunity for daily problem solving and creative acrobatics because the target will be continuously moving throughout the months by many of the factors listed above. The user interface needs to be beautiful, simple, elegant, intuitive, and above all, useful. Balancing all these elements in a very complex system is a challenge the art department relishes.

In terms of pure aesthetics, the goal was to implement as many medieval fantasy elements as possible while still using modern-day UI techniques to efficiently communicate with the player. For example, many of the arrows, icons, boxes, and outlines have subtle flourishes on them reminiscent of medieval art. The balance was that it was enough to make these elements uniquely our own while not directly bringing attention to them.

The Heading One and Heading Two fonts use an embellished, whimsical serif font, while the body copy uses a very clean san serif font for easy reading. The general colour scheme was chosen for clarity but also to imply something being aged, hence why all the browns and Yellows. Old paper texture is used in a lot of the overlay boxes to imply that they were carefully drawn onto a scroll by artists. The overlay to select buildings is represented on top of a long piece of scroll paper. The buildings themselves on that scroll paper have an oil painting application reminiscent of that era. For the world map, the main inspiration was to make it seem like board game pieces like Settlers of Catan. The tiles represent different land artifacts like mountains and lakes and deserts etc. The goal was for them to look like wooden pieces crafted by an artisan.

The wonderful thing about this project is that none of the elements we’re creating have been set in stone. It will be iterative based on need so we will continually evaluate and change this UI based on player response and gameplay elements. Pushing and pulling things until there’s no more room for changes. Players might not consciously even notice all the subtle nuances in the design but subconsciously it will add to the total of our game’s ability to transport the player to another world.

It may not seem that exciting, but these basics will create a strong foundation for in-game combat. Oh, and we nerfed the guard towers. They’re no longer autonomous killing machines and they need archers to function.

I hope you’re enjoying the proof of concept and stick around for our updates in May!

I am implementing the enemy kingdom for the player to beat. The kingdom now shows the population of the enemy villagers and units. As well, the enemy now sends scouts to survey your Keep.

Here are things I have worked on this week:

Here are the things I have worked on:

Units will now have armour and weapons that will degrade from use when there armour or weapons break they will need to be resupplied to keep fighting. This will help with the realism of the game and help to focus on the supply chain aspect of all the buildings.

Random events will now appear in the game when their conditions are met, these random events will have choices with moral and resource consequences. Lastly, I investigated a potential new way of performing navigation.

Currently, the navigation requests are causing a bit of a bottleneck when your population count grows over a couple hundred. This may or may not make it in the next update as I am still in the investigation phase of it.

The last two weeks have been a fun process, creating how the transition will work for your troops from the castle's map to the world map and making more scenarios for the player to make decisions on.

We wanted to make how the troops move from the kingdom to the world a realistic process that would include giving them the supplies they need for their journeys.

For example, if they are to survive for months on the road, they will at least need the food to do that. This also means that along their journey they can collect precious goods which can then be transported back to the kingdom.

So, there are some things that Team: Thrive: HLtC is working on this week! Drop a line to steven@zugalu.com if you have any questions.\

Want to get the latest news and chat with the developers in real-time? Join our Discord Channel for all the latest updates!

That’s it for now. See you soon!